When we arrive in a town or city we’ve never visited, such as Asheville, North Carolina, we ask locals two questions:

1. Where is the live music? (Watching live music is one of Lindsay’s passions. Come summer, don’t expect to see her traveling much as her concert-going schedule is jammed packed!)

2. Which restaurant or bar has the best cocktails? (As the tippling traveler, this is my forte.) Lucky for us, we posed the last question to Jesse Ratliff, general manager of MG Road restaurant.

“I’m off work in a few minutes. Why don’t I just take you of my favorite Asheville bars.”

On the heels of a fight with Google maps (on foot, the directions stink!) earlier, I was game. However, I looked at Lindsay to make sure she was okay with it. (I’m forever the more gung-ho or gullible, depending on your perspective, of the VVs.) She gave a subtle nod of approval and a slow blink of the eyes—that no one would detect except someone who had been in umpteen questionable situations with her—and I agreed to the offer.

Here I was, bar crawling with a stranger… again. But, hey,  it worked in Scotland. Plus, Lindsay was in tote this time, so why not try it half way around the globe in the town known as the “Portland, Oregon of the South”?

Okay, we were eating dinner there (fried catfish with white gravy!), but it counts as we sampled a few cocktails here. Their progressive cocktail menu—designed by Jesse Ratliff and a team of talented barkeeps—changes seasonally. The night we went, I chose the Telemundo off their new spring menu. Created by Kyle Gray Beach, it was made of mezcal, lime, kaffir-infused St. Germain, egg white foam and topped with chili powder (in photo below). Delish! On Mondays, it’s a hotspot for bartenders and servers from other bars and restaurants in Asheville to hang. Steampunk meets funk. This was our favorite bar in all of Asheville for its unexpected, ‘down-the-rabbit-hole’ vibe. A woman leading a man around the dance floor to live accordion music. Patrons rocking styles from the Victorian Age to the Victoria Secret catalog crowding the bar. And a bartender with a perfectly sculpted handlebar mustache with plug piercings to boot deftly making drinks. Surreal, sublime experience—do NOT miss this. It’s members only, so either pay the membership fee (a few bucks) or go with a member. Just a block away from Crow & Quill sits an ambiguous black building with no signage. Yet another side of Asheville awaits at this self-professed dive bar. Expect to see hippies and hipsters alike swigging down beers and playing Foosball. We hit these bars or restaurants in Asheville a few days earlier, but they deserve to be on the list as well for their unique libations:

Upon entering, notice the curious sign that reads: “Knird, Doof” (see photo above.) No, it’s not some ancient Welsh language, as I guessed. It’s the words ‘drink’ and ‘food’ spelled backwards. Every Sunday, the night we went, is ‘all in the family’. Talented chef John Fleer serves up family style four-course meals. Part of the fun is being seated with strangers-soon-to-friends at large communal tables. Of course, the lamb cassoulet was divine. Equally impressive were the cocktails, both original and classic by barman Spencer Schultz. If you want to skip the meal, just head straight to the cozy 8-stool bar for a well-crafted drink. Top of the Monk

Head to the speakeasy-style on top of the Thirsty Monk Belgian beer bar for a lock-and-key treats with every cocktail. Check out Dodie Stephens of Asheville CVB below as she retrieves her nibble from the mailbox near the bar. And the bartenders here are especially serious about delivering exactly what you want. Don’t see it on the extensive menu, just ask. Housed in a renovated auto repair shop, grab a table in the beer garden  decorated with colorful mannequins, taxidermy and herb-lined vertical gardens. Then, order up a sake flight of house brewed sakes, flavors range from hibiscus to Nigori. (Ben’s is one of a handful of U.S. sake makers). For food, check out the Chinese 5-Spice bratwurst, duck tacos and wonton nachos. 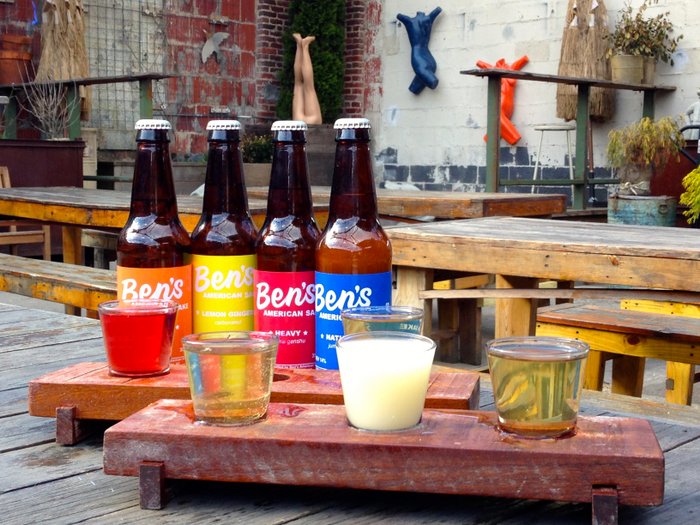 I confess; I am, sadly, not a beer person. But, I’d never tried a sour beer (beers that taste sour, like sour patch kids!) before and that’s what Funkatorium—an outpost of local Wicked Weed Brewing Co.— specializes in. And yes, the flight of five beers was a fun (and funk-filled) experience. Even if you’re not a beer person, it’s got a cool, kickback vibe with plenty of tasty educational opps. Head to Table restaurant and then go upstairs to Imperial Life, a cool hangout with inventive sips made with housemade bitters and infusions. The drink menu has four sections: Employee of the Month (cocktails that all feature the same spirit with different twists), Trying to Fit In, Woodsy (cocktails with bitters) and Party Animal (crazy concoctions with emphasis on the booze). With live DJs on the weekends, the crowd usually is college age to 30-somethings.

Farm-to-glass it what it’s all about. Opened by Charlie Hodge (a Portland transplant) less than a year ago, Remedies specializes in root and herb-based cocktails foraged or grown locally. Don’t miss the Root Daiquiri or sans-booze herbal sodas. On Sundays, a ‘star-tender’ aka guest bartender mans the bar with his or her own creations. One word: Porron! Besides the award-winning Spanish food by chef Katie Button, a Food & Wine Best New Chef of 2015, Curate offers a crazy cider sipping experience out of a carafe with a spout (aka porron in Spanish). And yes, it takes some practice; so don’t feel bad if you miss your mouth completely or it dribbles down your face, like it did mine. Hot tip: the faster you tip it up, the better chance for the liquid to hit your mouth—instead of your eye or chin. Although we didn’t have time to hit them all, these bars were recommended by in-the-know locals too:

As for the answer to Lindsay’s question? Jack of the Woods is the spot to check out for local, live bands almost every night— everything from Irish folk to indie funk.

For more ideas on what to eat, do and see in Asheville, visit this handy site chock full of great information: ExploreAsheville.com

Did we miss one of your favorite bars in Asheville, NC? We’d love to hear about it in the comments below…