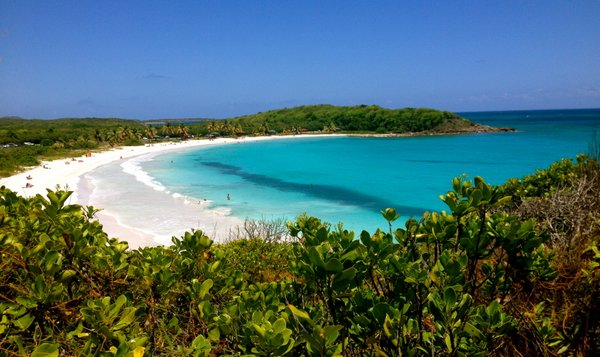 The sleepy island’s— of roughly 9,000 people—nightlife and cocktail scene is small, but what there is, is authentic. As produce is hard to come by living on any island, many of restaurant and bar owners are growing their own herbs, fruits and vegetables onsite, which translates to fresh sips and eats. On the first night, my friends and I headed to Esperanza, one of the only two hotspot towns on Vieques. For a Sunday evening, the Malecon (beachfront walkway) was hopping. Locals playing dominoes at the dive bar La Nasa, kids jumping off the nearby dock into the water and every once in awhile, someone zipping by on the main road horseback. Duffy’s is a popular watering hole with locals in Esperanza for a potent fresh-fruit margarita or seafood Bloody Mary after a sun-soaked day on Red Beach, one of Vieques’ best beaches. Or go bananas for bananas at Bananas with the Dirty Banana drink and hot banana starter.

For a stellar meal and well-executed cocktails, head to the expat owned El Quenepo. Twists on classic tropics cocktails abound at El Quenepo — perfect companion for watching the sunset over the Caribbean ocean. One of my favorites was the Don Mojito (in photo above) of Don Q rum, fresh ginger, lime and soda. The next night, we opted for sunset cruise on a 47-foot catamaran with Powercat. The ship’s crew doles out a serious feast of noshes, rum punch and wine. You can tour around the island or for just zip out on a dingy and simply watch the sunset while anchored. Hands down, Tin Box, the island’s newest restaurant and bar (and only oyster bar) has the finest cocktails, utilizing herbs and fruits from the onsite garden. And although there are plenty of tropical cocktails on the menu, they carry a potent punch. I don’t even like watermelon and I’m still dreaming about Tin Box’s fresh watermelon margarita (in photo above). Other specialty drinks include the Bloodless Mary, made with 18 different herbs and vegetables, and the Planter’s Punch with blackberry brandy.

Another great spot for seriously creative sips and eats is Next Course. Next Course’s eclectic menu, from Puerto Rican to creole to French, is inspired by Chef Buddy Stone’s travels. My kind of place, indeed. Ask for their “Martini of the Day”. Usually it’s a vodka infused special. The night I went, the drink of the night was the Bell Pepper Martini. Another must-try tipple is the frosty Lime & the Coconut cocktail of rum, coconut milk and lime.

I met the jet-setting Bravos Boyz while on the island and shared a wonderful dinner at their tricked out house with stunning panoramic views of the ocean. The Bravos Boyz, Kevin Cunha, Alberto Munoz and Thom Denton (in photo above), are the go-to style gurus on Vieques who specialize in selling homes, giving them extreme makeovers and renting them out as fabulous vacation properties, mainly in the trendy Bravos neighborhood.  Here’s their picks for where and what to drink when on the island of Vieques:

Vieques is a buffet of fab cocktails and bars. We celebrate at El Quenepo with Dio mixing Parcha (passion fruit) Caipirinhas. We love the Green Mary at Tin Box. Duffy’s has the perfect fish taco and Parcharita (passion fruit margarita). Arelis at The W Hotel knows the Bravos Boyz recipe for the Grey Goose Martini we demand. Dottie at Trade Winds rocks and knows what soothes the Boyz with the best Sunday Bloody Marys and brunch in the isle wide. On the way to our favorite beach, Playa Caracas, we stop at the Resuelve kiosk for the coldest Medalla beer island wide and pastellilos (Puerto Rican empananda) your mama wishes she could make. The W Hotel is the poshest choice if you want a five-star resort stay and the newest cool boutique hotel is El Blok, but sweet vacation rentals with killer ocean views and island-chic decor (see photo above and below) abound. Flipkey, a TripAdvisor company specializing in vacation rentals, has nearly 130 properties on Vieques (many are managed by the Bravos Boyz) — from super-lux to utilitarian.